For an author to be without words is never a good thing, but AND today I am struggling to find the right words to describe the emotions coursing through me.

It started this morning when I woke up grumpy. I’ve been fighting some type of sinus/cold virus for almost a month and I’m at my wits end. I wanted to whine, but didn’t want to subject anyone I love to that self-pity so I cocooned in my room, putting away laundry and trying to pray.

When my cell phone started chirping with text after text I grabbed it in frustration, then smiled. A dear friend was announcing the release of her first book. She’s been working on this for quite some time and I’m delighted it has all come together. The multiple texts from other members of our writers group showed all were just as happy. Reports of orders being placed on Amazon warmed my heart and energized me to get dressed and head out the door.

It was 10:15 and I wanted to see how many people were already in town for the much anticipated SpaceX Falcon Heavy rocket. Growing up during the Space Shuttle program, I admit I grew jaded with the crowds that tromped into town for launch days. Cars clogged the roads and every empty field along the river. Families wandered into the road without looking and causing us locals to be extra vigilant as we went about our daily lives. This morning, though, I reveled in the cars parked along the side of the road and the visitors milling around. I ached to stick around and be a part of this historic day, but work called and I had to get home to get ready. 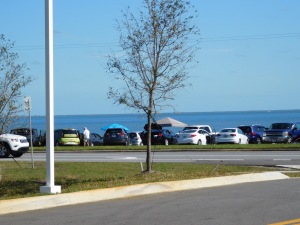 Early birds get the best views

The large building across the river is the Vehicle Assembly Building. Until December there was a boat from Hurricane Irma where this RV now is 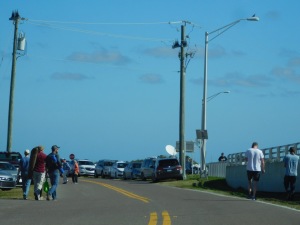 By the time I arrived at the office, the launch had been pushed from 1:30 to 2:20 due to upper level winds. I felt a selfish sense of hope that the launch would be scrubbed and rescheduled to tomorrow when I would be home to see it. When the next delay pushing back to 3:45 was announced, again that selfish spirit perked up.

As 3:00 approached, I prepared to access the SpaceX livestream. The minutes ticked down and there was no announcement of another delay or a scrub so I chose to hope that all would go well. My pulse quickened when we reached five minutes before launch. I focused on my work until we were just under two minutes then my eyes couldn’t be torn from the video. Steam billowed around the three rockets strapped together and I clasped my hands in front of my face, whispering words of encouragement as if the machine could hear me.

With the last seconds my throat tightened and my breath caught. Would it fire? Would it rise off the ground? Would it explode on the spot or a few seconds into flight? Memories of Challenger gnawed at the back of my mind. The rocket rose higher and higher, three flames of fire blended into one. The excitement of the SpaceX team was tangible as each milestone was ticked off. I watched in awe, knowing how unheard of a successful test flight such as this is. I felt the tears gathering in my eyes and longed to share the excitement with a crowd of like-minded spectators.

The adrenaline has faded away and I think about how long it has been since the American people had a hope for exploration beyond our own planet. We have sent machines to gather data, but we need to send people to experience the outer regions first hand, to provide information only a human can express. Today, was the first step toward sending humans beyond the International Space Station and I feel an excitement that I hope you all can share.

In case you missed the launch, you can watch a replay below.