Many of you who have followed this blog for a while know that I write Christian fiction. For six days I will be moving out of my comfortable niche and participating in a sale with a  number of authors representing a wide variety of genres. It’s a great opportunity to reach a whole new group of readers.

The Books-a-Fire authors are back with more fabulous deals and NEW books to buy. There are no gimmicks or hoops to jump through, only incredible prices on every single book. Just point, click, and buy books in every genre for just 99 cents each.

YES!  All 46 books on the page are priced at 99 cents to make your shopping easy and affordable.  For less than the price of a dinner out, you could buy every single book on the page.

To make it really easy, we’ve also created categories.  Click your favorite category at the top of the page and see all the books that are on sale in that category.  Load your Kindle with all 46 books and enjoy a quiet read now that the kids are back in school.  You’ve had a hectic summer so treat yourself to a good book today!  Go to www.booksafire.com

The rippling water flickered like hundreds of camera flashes at a rock concert, causing Julianne to squint as she walked past the marina. She came to a stop in front of a bright yellow door and checked the address on the business card, hesitating. She was nervous about what waited on the other side.

Get a grip, she thought, you are going to have to be brave and confident if you want to impress Cameron. Tucking her hair behind her ears, she raised a hand and knocked.

The door flew open and Peter Raphael’s face lit up as he recognized Julianne. “You came. I am so happy! Come in.”

Julianne stepped into a spacious studio lit by floor to ceiling windows along the north wall. Four easels were evenly spaced in a straight line in front of the windows, all but one covered by old, spattered sheets.

The concrete floor was a work of art itself with splashes of paint around each easel. To her right, Julianne saw paintings leaning against the wall; six columns containing eight to ten canvases each. To her left there was an old refrigerator, a microwave, a small wooden table, and a deep sink.

“You were the only person who took notice of Sunburst last night,” Peter said, a look of sadness flickering in his eyes.

“Maybe they were just overwhelmed by the number of pieces being shown.” Julianne tried to sound reassuring but knew her words were hollow. “You do seem to be quite prolific.” She waved her hand toward the stacks along the wall.

Peter gave a dismissive shrug. “Those are okay, but nothing special. I can paint those in my sleep and yet that seems to be what everyone wants to buy. Can you believe Sabastian sold eight of my paintings last night?”

Peter shrugged again. “I only sell those so I can work on the ones I truly love.” He took Julianne’s hand and led her to the easels. Before placing her in front of the first, he stopped. “Close your eyes.”

She hesitated, but after studying Peter for several seconds, she consented. She felt him take her by the shoulders and guide her steps, then she heard a swoosh of fabric as the sheet was removed and dropped to the ground.

She opened her eyes to find a canvas similar to the one at the gallery, but in purples, whites, and blues. At the heart of the swirling colors was a shape of a house like the one she had discerned in Sunburst.

“It’s beautiful,” Julianne whispered. Where Sunburst had made her feel energized, this piece relaxed her, reminding her of the peace she’d felt in the park only a week ago.

“It’s the view through the moon, right?” Julianne turned to find Peter practically shaking with joy.

“I knew you would understand. I call it Moonglow.” He slipped an arm around her shoulder and guided her to the next canvas. This time he didn’t make her close her eyes, but whipped the sheet off with a dramatic flourish.

This canvas was darker, predominantly black and grey with pricks of gold. Julianne studied it, looking for the now familiar house, but not seeing it. Peter stood slightly behind, waiting for her to speak. Julianne could sense him bouncing in anticipation 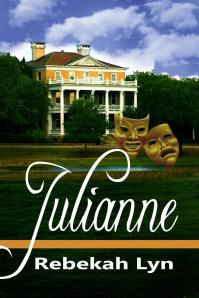 and feared disappointing him. She allowed her eyes to lose focus and then she saw it. Two of the pricks of gold were perfect squares, like lights shining through windows. With that realization, she was able to make out the faint outlines of the house in pale grey swirls.

“It’s almost like looking into a black hole and finding its core,” Julianne finally said, turning to face Peter. His expression assured her she hadn’t disappointed.

“Actually, looking from the black hole down on Earth, but you had the general idea. This one is Darkness.” Peter moved her on to the final covered canvas. When he removed the sheet, Julianne gasped.

The scene was completely different, but she understood right away that the house she could barely see in the other paintings was now before her, although obscured by a haze, as if she were flying over it and a thin layer of cloud spread between her and the scene below. But what truly took her breath away was the building itself. It was Garner House. 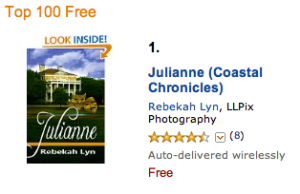 The adrenaline has run out, there are no more tweets left to schedule, and the final numbers are in. The three-day free download promotion for Julianne wrapped up at 12:00 am pacific time last night, and I am left without words. My publicist, Onisha, and I are sitting in our pjs too tired to move, but the glow of accomplishment still shines in our eyes. We reached out to 60 websites and blogs, sent thousands of tweets, and spent days praying Julianne would get picked up by those outlets that don’t accept submissions.

Onisha’s prayers were answered when Inspired Reads chose to include Julianne as one of the three free books they promoted on Wednesday, September 5. Mine was answered when Indies Unlimited included it on their Freebie Friday list. I was overwhelmed by the support of the indie author community over the past three days. Indie Author News and Indie House Books were prolific with their tweets of the promotion. I want to thank them and everyone else who tweeted, posted on Facebook, or included Julianne on their blog, but most of all I want to thank God.

Last week was a downpour of blessings upon my writing career, showing me how God’s plans for my life are far greater than my own.  This post will be a bit longer than normal, but I hope you can forgive me as I really want to take a few minutes to share this experience.

On July 8, a review of my new book, Julianne, was published by Lonita Cook on the Kansas City Examiner website.  Ms. Cook’s kind words for the story and writing style gave validation to my writing dream, but what really made my heart sing was how the reviewer really captured the essence of why I write, which is to tell stories that will minister to those who are already followers of Christ and provide a warm invitation to those who aren’t yet believers. However, it wasn’t just the positive review, the response to the review was also overwhelming.  As of this writing, the article was shared via Twitter 149 times and Facebook 34 times.  I hope these numbers are encouraging to Ms. Cook as well, because it is a testament to her own beautiful writing.

Just as the glow and excitement of the review were fading, I started my first giveaway via Kindle Direct Publishing’s Select program.  On Wednesday and Thursday,  July 11 and 12, my business manager and I worked to promote Julianne being available as a free download for Kindle.  I admit I was expecting to get 20, maybe 50 downloads.  When I first logged on Wednesday morning I was floored to see there had already been 193.  When the promotion ended at 3:00am on July 13, a total of 1,749 books had been downloaded worldwide.  The idea so many people chose a book I haven’t hesitated to promote as Christian fiction has given wings to my creative spirit.  Since my first book sale, I made a commitment to myself to pray for each person who makes a purchase.  This past week certainly made the prayer list longer, but I treasure each of those unknown lives.

Despite being emotionally and physically drained after all of this wonderful excitement, I had a taste for strawberry scones.  I

made them Sunday afternoon after getting caught up on all the mundane tasks pushed aside to focus on my marketing.  They smelled absolutely wonderful in the oven and were the perfect end to a dream week.  The recipe I used can be found here if you want to take advantage of the end of strawberry season yourself.