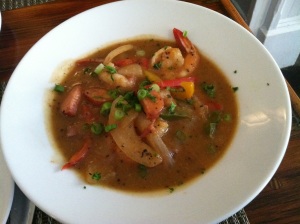 This weekend I took a road trip for a family reunion in North Carolina.  On the way we stopped to visit my best friend in Charleston, SC.  After staying up until the wee hours of the morning and sleeping only a couple of hours, we ventured to historic Charleston for lunch at Poogan’s Porch.  This lovely house, built in 1888 has been serving patrons since 1976.  We were seated in what was probably a parlor at one time, with floor to ceiling windows open wide to allow in the cool breeze.  With so many choices on the menu, mom and I decided to share the fried green tomatoes, mac & cheese, and shrimp and grits.

The tomatoes were sweet and tender.  The mac & cheese made with gouda cheese, country ham, and shallots could become my new favorite comfort food.  The shrimp and grits were so completely different from what I have always imagined.  With peppers, onions, sausage, and blue crab gravy, it reminded me of jambalaya.

After lunch, we drove around, ogling the beautiful old houses and I could feel a new story blooming within me.  I can see that I will need to spend a few weeks soaking up the atmosphere in this wonderfully historic city for another installment of the Coastal Chronicles. 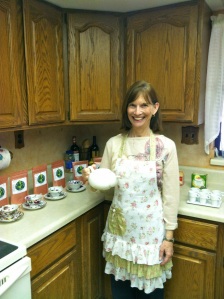 Wednesday I had the privilege of participating in an Afternoon Tea with the Author, a series of events for fans to get to know more about my writing and me.  Pam, the hostess is a dear friend, and I am so thankful for her hospitality.  This was Pam’s first tea party so I offered to help with the food, which of course gave me an excuse to bake.   I was so intently focused on the party to come that the I didn’t realize I had forgotten the cranberries in the first batch of cranberry-orange scones until the batter was already mixed, rolled out, cut, and placed on the baking sheet.  I’ve always had trouble following a recipe, my brain seems to skip ahead two or three steps.   Not to worry, a new batch was easily whipped up.

I also decided to try out a couple of new recipes for chocolate cookie dough truffles and quiche.  Both turned out well and I was very happy with how easy there were to make.  The quiche were crustless and cooked nicely in my new silicone baking molds.  By the time our guests arrived the table was laid with a variety of delicious treats and eight different teas.  I have to thank Hans at Our Home Tea for the wonderful selection of tea and the adorable little tea pot with infuser for the loose leaf teas. 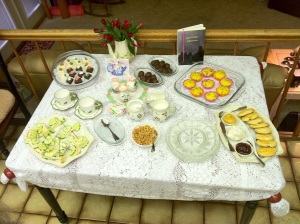 We had fun tasting four different teas – China Breakfast, Tropical Crimson, Jasmine, and 1,000 Cranes.  I enjoyed them all, but I think my favorite is the Jasmine.  I have always loved the smell of Jasmine and there is something very calming about the tea.  I enjoyed have the chance to talk about how I started writing and giving a teaser for the books slated for publication later this year.  I look forward to many more of these tea parties in the coming months.

I have been deep in revisions of Julianne, my next novel, the first in the Coastal Chronicles series.  With each draft I get to know Julianne and the other cast of characters a bit better.  The other night, as I was working with Julianne in a diner scene I learned that she doesn’t like Red Velvet cupcakes, in fact she isn’t a big fan of deserts overall.  This was surprising to me because I LOVE sweets, especially Red Velvet.  I can’t tell you what it is about the Red Velvet, maybe because it is always so moist, even days after its been made.  Just thinking about Red Velvet, I had to stop writing and go make a batch of cupcakes. 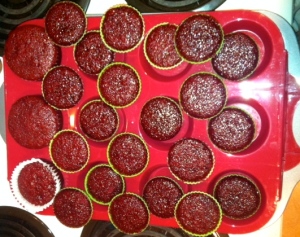 What Julianne does enjoy though, is gourmet food.  He brother, Michael, owns several restaurants and resorts, and is married to a chef, so Julianne has had the chance to try a wide variety of foods.  One of her favorite dishes is a baked Mahi Mahi.  At least I can agree with her there.  Mahi may not be my favorite dish, but I do love it.  Growing up on the beach, my grandfather used to come home most nights with dozens of fish, mostly Whiting and Flounder.  I still remember one night when I was about six or seven when I ate at least eight fillets of Whiting.  I ate until I was sick and yet couldn’t stop they were so good.  I miss those days, so writing about a young girl in a coastal town with plenty of good fish available seems somewhat fated.

If you would like to check out my debut novel, Summer Storms, it is now available for Kindle & Nook, or in print at Lulu.  Julianne is expected to release in May or June.  Be sure to check back here for more details or Like my page on Facebook.